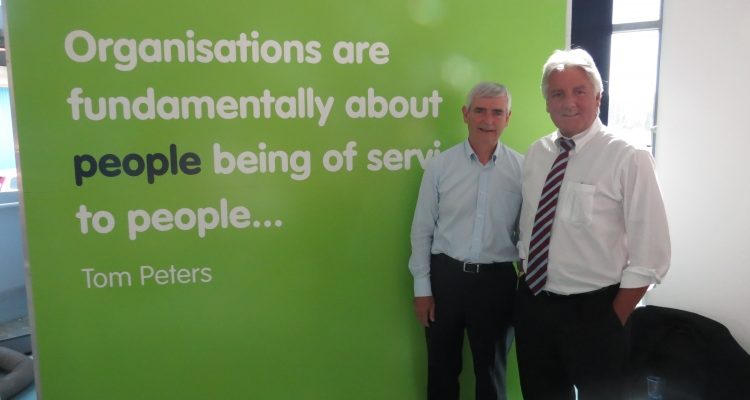 The audience, a mix of Sewell employees and business representatives from across the city, asked the speakers a range of questions about their experiences, opinions and lessons to make for a very insightful evening.

For those who were unable to attend, a selection of questions and answers from the evening’s session are below.

The next ‘Let’s Talk Leadership’ session will be held at 3pm on 19th September, with guest speakers Cllr Stephen Parnaby, Leader of East Riding of Yorkshire Council and Terry Hodgkinson, former Chair of Yorkshire Forward. Places are limited so book early. Contact Laura Fermandell on 01482 713096 or events@sewell-group.co.uk to reserve your seat.

Q. What is leadership?

Richard said:
“Leadership is the art of getting others to want to do things that you are convinced are important.”

Jim said:
“Leadership is about getting the extraordinary out of the ordinary. Leaders are visionary, they don’t see the barriers – they see success.”

Q. Which leaders have influenced you?

Richard said:
“Thinking truthfully about leaders throughout my life, people influence how you are from a very early age. I grew up in a family where I didn’t see a great deal of my dad as he was out working. My mum therefore had to fight for the wellbeing of her children, so I looked up to my mum as a leader.”

“I went to a fabulous school, my English teacher made 32 kids feel excited about being in the library instead of out on the playing field. I’ve been lucky in my life to work with great leaders too.”

Jim said:
“I agree with Richard, in education you can be influenced by some great leaders. My Headmaster set the most incredible standards, he was clear on what he wanted and what he expected and he inspired generations of young people to achieve. People often choose careers through the impact of teachers in subject areas.”

“In my career, a Marketing Director I worked with at a young age was inspirational, he was hugely pace setting, very visionary and really encouraged me to challenge the boundaries and do things differently – I’ve done that ever since.”

Q. Who, in your opinion, are iconic leaders?

“There are the obvious national and international figures, people who have a clear vision and show perseverance to achieve it. In sport Alex Ferguson is a great example. He led by developing a culture and was consistent with his leadership style.”

“Locally, Alan Johnson is a terrific leader as he’s very true to his word, integrity is very important in leadership.”

“There are lots of different approaches and styles for leadership, often the evidence of success is if what comes after is very different to what came before.”

“Nelson Mandela in my opinion is the world’s greatest political leader. In 1962 when he was put on trial for terrorism he made a speech about equal opportunities. They locked him up for 27 years, and then years later he said the same thing in his presidential speech. That’s a classic lesson – stick to something you really believe in and remain consistent.”

Q. What is a bad leader?

“I’d say stereotyping and applying a blanket leadership style for everyone, one style will not suit everyone as people respond in different ways.”

“Leadership is about engaging to influence others to act. You need to think about what is actually going to engage a group of people, as you would with customers. We all think we know what good customer service is, but does the customer actually agree with us?”

“Good leaders know when to blend the styles. Begin by thinking about your next challenge and who the people are you’re going to need to help you overcome that challenge. Find out what makes them tick, invest some time learning about them.”

“A good example is a stand up comedian. They’ll tell five jokes and see what their audience laughs at, and then tailor the rest of the show as a result.”

Q. What are your biggest achievements, what are you most proud of?

“It’s not my biggest achievement, but I’m most proud of my part in CatZero; it’s transforming lives, it’s a legacy.”

“An event I’m most proud of within CatZero was our effort and determination in the Clipper Race. We’d set off and on the third day one of our crew members looked like he had appendicitis so we had to turn back. By the time we started sailing again we were 200 miles behind everyone else. The team’s motivation disappeared.”

“We got together and set an achievable goal. At this point winning to us was about not coming last.  We worked hard and day after day we took over yacht after yacht. By the time we reached the home stretch we were second and could see the first boat – turns out we were the first over the line!”

“If we’d have said three days out we could still win we couldn’t have done it. I learnt a lot about team work and about keeping the vision in mind but setting achievable targets, monitoring progress and finding different things that motivate different people.”

Q. What has been your biggest challenge and how did you overcome it?

“Leaving a big company to start a small company was a challenge, but it was the most fundamentally important thing I did. I’m so glad I gave up corporate life for a rewarding career. In life you need to spot an opportunity that means you can grow and become a leader.”

“We’re crying out for leaders internationally, nationally and locally. There are more vacant seats than people with the courage to sit in them. Hopefully you will look back on this day as the day your life began to change, as the day a company spotted you as having bright eyes and gave you the chance to become a new leader – that yesterday you may not have imagined you could do. The next sequence from this programme can be life changing if you allow it to be.”

“In my earlier days at Smith and Nephew, share prices had been stagnant for a few years, so the company appointed a new CEO, a man called Chris McKenzie.”

“He made the bold decision to reorganise the group and told me to pick a team to help him and me do that. I was presented with a big thick dossier about what the company needed to achieve and towards the back there was just a single page on change management. I thought “What am I going to do?!” Here’s the obvious thing – surround yourself with the best possible people who can help you achieve what you need to achieve. Get the right people, with the right attitude that do the right thing.”

Q. What are your leadership top tips?

“Spot opportunities, work on your credibility and be visionary – people follow people who are obsessed with the future and what might be. Remember leadership is about the impact you have on others – winning hearts and minds, not wallets.”

“Have the courage to follow what you believe in. Often things that may seem like barriers are not, they’re just the way things are done – so find a way around them. Be bold, persevere and keep that vision in mind.”