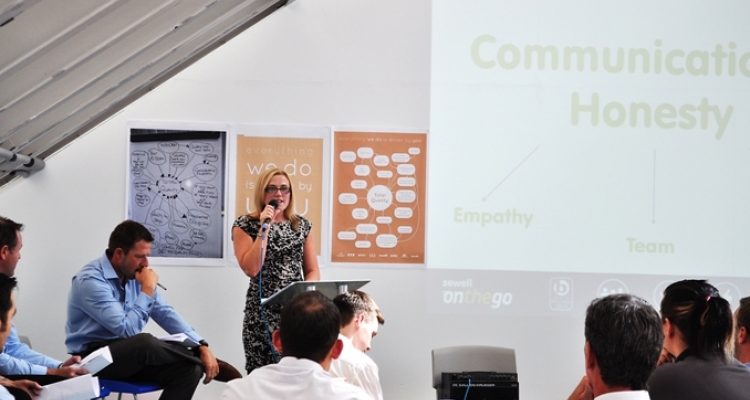 Leaders from across Sewell Group joined leadership enthusiasts at the 360 facility yesterday to share their stories and the lessons they’ve learnt throughout their careers.

Kate Sleight from Sewell on the go, Construction Project Managers Steve Owen, Mark Boothby and Martin Standley, and Sean Henderson from Sewell Facilities Management talked about their career paths with the group.

“The session aimed to teach our SPARCs about distributive leadership, meaning you don’t have to be the CEO of a business to be inspirational and inspire action in others, everyone has the opportunity, but it’s your choice as to whether you take it. Our speakers apply their leadership skills everyday to motivate others but all use slightly different styles; they were more than happy to share their thoughts and experiences with our SPARCs.”

Sean Henderson has recently transferred from the Construction part of the business to head up operations in the Facilities Management division. He shared his career lessons with the attendees:

“I left school and began my career with a joinery apprenticeship. I always knew I wanted to lead and not be led. I had a great mentor who taught me about patience, tolerance, attention to detail and leading by example. These attributes have been imperative throughout my career.”

“Once qualified, it was fair to say I was thrown in at the deep end. It was very much sink or swim, but I worked hard, achieved some great results and developed my leadership skills very quickly. As I progressed the projects got bigger and my responsibilities became greater.”

“I’m moving into a new chapter with Sewell, with my new role in Facilities Management, but the great thing about leadership attributes is that they’re transferrable.”

“FM is a totally different mindset, but the end goal remains the same – guarantee a happy customer. No matter what role you’re in its all about dealing with people in the right way to suit their characteristics and getting the best out of your teams.”

Kate Sleight from ‘Sewell on the go’ gave an overview of her role in the fast paced retail side of the business and explained how she balances her time and prioritises effectively across the forecourts:

“I’m certainly a glass half full kind of person, I always try to see the best in situations and learn lessons where I can.”

“In retail we’re a 24/7/365 business, we never close the door, but I can’t be there all the time. I have to have faith in my team; each member plays a key part in the business’ success. Communication and planning are both vital, as is ensuring your expectations are fully understood by the team members.”

“Communicate, speak your mind, but also listen to what others have to say, there’s more than one way to get a successful result. Deal with little problems before they become big problems and be honest, your teams will respect you for it.”

“I joined Sewell in 1996 straight out of school, learning and developing over the years. I managed my first construction project in 2001. I looked after a variety of projects for the next 10 years, ranging from the value of £100,000 up to £2m.”

“In 2011 I was asked to lead the new build and refurbishment of Malet Lambert School as part of Hull’s Building Schools for the Future Programme, a £24m project which would involve managing over 2000 operatives. The construction involved working around a live school, which meant classrooms for 1500 pupils were intertwined with the construction site. It was by far the biggest, most challenging scheme I’d ever been involved in.”

“I surrounded myself with a mix of people who had a wealth of experience and skills to make up for my knowledge gaps and empowered them to take ownership of the project.”

“I spent time getting to know the personalities working with me on the project so I could understand their state of mind and appreciate if they had external influences affecting their work life. If you understand people’s state of mind and offer empathy and support when they need it, they’ll respect you and work hard for you in return.”

“I believe leadership is about inspiring people to deliver a common cause. As a leader you need to instill pride, passion, enthusiasm and belief in the people around you. You’ve got to create positive people as they’ll create positive results.”

“At Thomas Ferens we knew we wanted to create a culture of quality, safety and pride. We encouraged these behaviours by developing an initiative and then communicating it visibly around the site. ‘Everything we do is driven by you’ was our strap line, it developed a sense of pride and ownership in everyone working on the site, it encouraged the right attitude and led to a great end product.”

Steve Owen, Project Manager at BAE Systems talked about how he’s applying his leadership skills to head up a complex programme at Brough:

“I’ve worked at BAE Systems since 2007. When the decision was made to transfer most of the aircraft development to another site outside of Yorkshire, Sewell were tasked with the redmodeling of the various spaces to prepare for new businesses who would let the vacant offices or warehouses, or, so that remaining BAE teams could be brought together into one area of the site. Having spent so much time at Brough and having good knowledge of the site layout, I was asked to head up the project.”

“I’m surrounded by a very experienced team, meaning they’re all more than capable at completing the task at hand, but require different types and levels of support from me. I don’t manage them day to day, as they don’t need it – leading isn’t always about controlling every aspect of the task at hand. I lead by offering support and advise when its needed and being head communicator across the team and to and from our customer, so everyone is kept in the loop and we’re effectively managing expectations.”