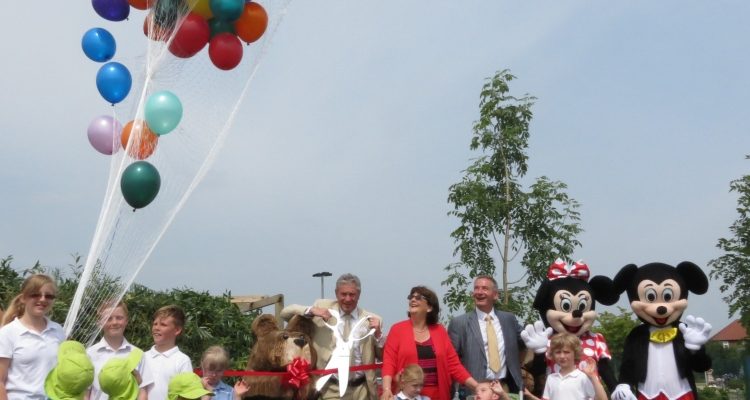 Hob Moor Children’s Centre has celebrated the development of their sensory garden with a Teddy Bear’s Picnic and balloon release.

Pupils, staff and special guests were treated with a visit from Mickey and Minnie Mouse along with a Punch and Judy show to celebrate the opening of the garden, organised by the school’s PFI partner Sewell Group. The garden encourages integrated learning and play between the primary school and special educational needs school based on the Hob Moor campus. Principal Angela Shaw said:

“One of my first observations when I joined the school in 2009 was that there was a need to create opportunities for collaboration across the two schools, in learning and play, inside and out. Now, four years later, we have a great outdoor environment that both sets of pupils can enjoy.”

“We have three teddy bears carved from an old oak tree in the middle of the sensory garden, hence the theme of the celebration.”

Prior to the campus being developed under a PFI scheme in 2006, both schools in the federation  were under performing and in need of big improvements, both in the quality of the teaching and the facility that housed it. The school is now rated as Ofsted ‘Good’ and improving year on year. Angela continued:

“The progress we’ve made is a reflection of the how we work with Sewell. We all want continuous improvements for the children and we both stick to what we’re good at to achieve that.

“Teaching staff concentrate on what’s going on in the classroom, Sewell look after the building. We know they will carry out all of the necessary checks and upgrades that are needed and they’ll keep the schools clean and safe; we don’t have to worry about it.

Paul Sewell, Managing Director of Sewell Group, said the celebration is an important milestone for the federation and a great way to involve the children, because at the end of the day, this is all about their learning and development. He said:

“Angela and the teaching staff at Hob Moor have worked hard to improve both schools in the federation and what they’re providing for the children – I think we’re really starting to see their efforts come into fruition.”

“These children are the next generation, future leaders of organisations across the region, so we all need to be committed to improving learning in our schools. At Sewell we like to think we contribute to this by providing great learning environments and then keeping these environments at day one quality, adapting and evolving them when necessary, to support the needs school.”

“I’m really impressed by the attention to detail in the garden. You can play music, feel the textures of the carved animals, listen to different sounds the equipment makes – it’s ideal for both sets of children.”