BLOG: Why is the profile of mental wellbeing so far behind that of physical wellbeing in the workplace?

According to the Mental Health Foundation, 70 million workdays are lost each year due to mental health. This includes anxiety, depression and stress-related conditions, making mental health the leading cause of sickness absence from work. This had an estimated economic cost £34.9 billion for 2016/17 compared with the Health and Safety Executive (HSE) estimate of the economic cost of workplace injuries at £5.2 billion in 2016/17.

The government-commissioned ‘Thriving at Work’ report found people who were struggling with their mental health felt stigmatised at work and were not getting the support they needed, with employers unsure how to provide it. There is still a stigma around mental wellbeing in the workplace. As that begins to lift, it will become more visible, with employers recognising it as an issue but often not knowing what to do.

It would appear there is a chronic lack of understanding of mental health wellbeing in the workplace and fear of talking to anyone presenting with mental health issues because of a perceived risk of doing or saying something wrong. Returning to the Farmer/Stevenson Thriving at Work report to answer this, they propose a set of six mental health core standards to help employers improve the response to workplace mental health. These include: having a plan in place, increasing awareness among employees and routinely monitoring employee’s mental health and wellbeing.

Last month, I attended the Westminster Insights Managing Mental Health in the Workplace 2019 conference and there was some really good best practice shared.

Karl Simons, of Thames Water, talked about the need to create an open culture, allowing employees to feel like they can report mental health issues, just as they would report any physical issues. Only then will an organisation understand the full scale and be able to monitor the impact of initiatives introduced.

Dr Sally Coomber, of Public Health England, spoke of the need to have senior managers share their personal mental health experiences, again to encourage a culture of openness.

She went on to talk about how to try and engage employees in one-to-ones for those who you suspect are struggling with their mental health. Generally, the initial response will be “fine”. But apart from being an almost reflex response, Sally suggested this could stand for ‘Fed-up, Insecure, Neurotic or Emotional’.

According to Jessica Carmody, of KPMG, an organisation’s first-line managers are key and need to be given the training and tools to embed mental health wellbeing good practice in the workplace.

As a huge entity, KPMG could develop their own training. But, equally, any size organisation can implement similar courses provided by Mental Health First Aid England. There are general awareness courses which go some way to surfacing the issue as a talking point across the organisation through to specific training for individuals to act as mental health first aiders.

Current legislation requires that all companies of more than five employees must have a written health and safety policy. To get real traction with this issue across the spectrum of public and private sector organisations, perhaps the legislation needs amending to include mental health.

However, returning to the conclusion of my previous blog on inclusion and diversity, perhaps those organisations with a culture of treating everyone fairly and with kindness are already well on the way to putting mental health wellbeing on an equitable footing with physical wellbeing.

If you want to have the best available talent as part of your organisation, you have to provide an environment in which everyone has what they need to thrive and not just try to survive. 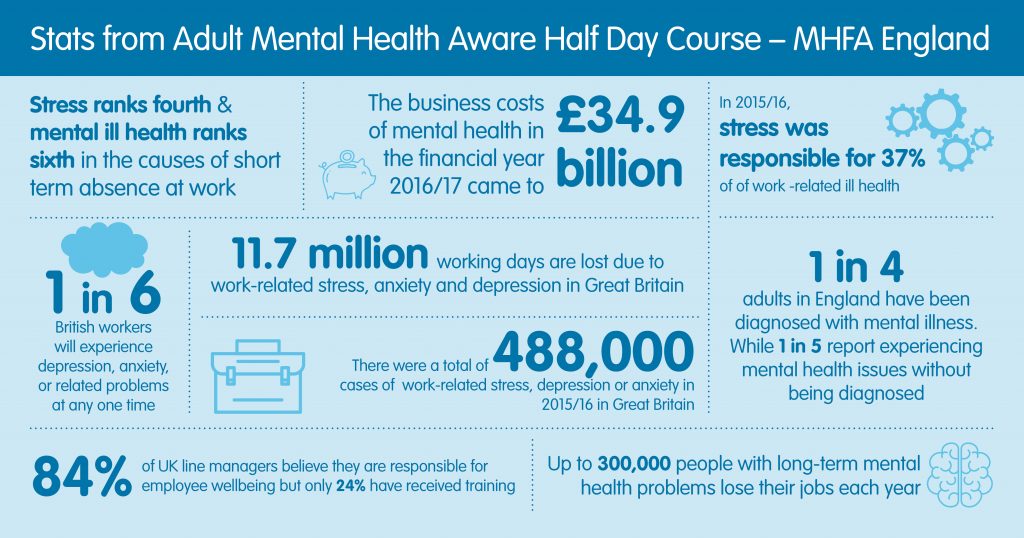